When Hurricane Harvey battered Texas, there was an overwhelming feeling within every single person at BobCAD-CAM that we needed to help those affected. Stephanie Dulski, Human Resource Director of BobCAD-CAM, sent out the email: “Fundraiser for Texas- Every $ Helps!.” Boxes began popping up around the office, collecting food, water and whatever else people could donate to help our neighbors to the West. Steadily throughout the week, many gave what they could, either in the form of cash or in the form of donated goods. That’s when Administrative Assistant, Taylor Pendleton, daughter of BobCAD-CAM CEO, Larry Pendleton, and VP of Operations, Lori Pendleton, took it a step further. 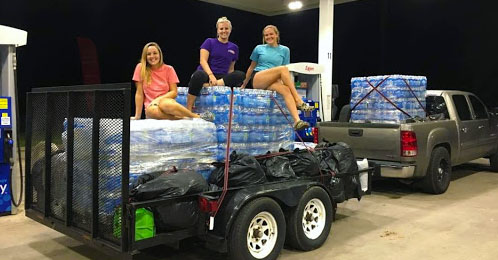 She was inspired after seeing posts on Facebook to personally go to Texas and bring relief for the animals and people affected. She and her friends raised money for gas and took donations from a major retailer. “We filled a 35-foot horse trailer with feed and hay for horses, as well as boxes of medical supplies. We had 4 vehicles full of food for dogs, cats and people. We also had 8,000 pounds of water that were donated by Costco,” said Taylor. Taylor and friends left that Friday, donations in tow, and drove all night to make it to Texas as soon as possible. “We had to wait an hour and a half to get into the state,” said Taylor. “When we arrived, it was like being in a ghost town. It was a weird environment,” she said.

No less than a week after Harvey, BobCAD-CAM employees found themselves in the way of Hurricane Irma. Located in Clearwater, Florida, BobCAD-CAM’s home office and employees were directly in the path of the monster storm. In a twist of fate and luck, many were spared Irma’s fury in the Tampa Bay area, and it was back to work on Tuesday following the storm. But on the coattails of Hurricane Irma was Hurricane Maria, 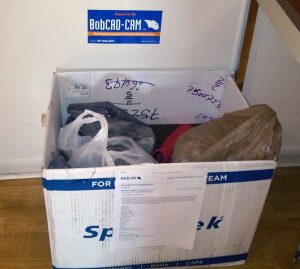 which became a category 5 storm in less than 24 hours. Many watched the storm’s path with anxiety and hoped to be spared. Maria missed the United States, instead making landfall in Puerto Rico. The storm annihilated the island… it was staggering. Another email went out from Stephanie Dulski, no more than a week after evacuating for Hurricane Irma herself, it read: “Donations for Puerto Rico!.” Stephanie didn’t feel like her personal experience evacuating influenced her decision to collect donations. “I don’t think it played a factor because we did the same thing for Harvey,” said Dulski. She adds, “Being displaced was a little uncomfortable, but coming home to an intact house made it hard to complain because I had a house to come home to. I knew it was time to help others who didn’t have a place to come back to.” That sentiment was again echoed by many people at BobCAD-CAM who also felt very fortunate and didn’t hesitate to start filling donation boxes with supplies for the people of Puerto Rico.
Personally, as an employee of BobCAD, it was heartwarming to see my co-workers unite to help others in need. BobCAD-CAM is a family and it showed when we were all tested mentally and emotionally with three powerful hurricanes back-to-back-to-back. After speaking with Dulski for a little bit, it was easy to see where her character comes from. “I just have the urge to help people when I can. I didn’t always have things growing up and people helped me. So, now that I’m in a position to help out, it feels important to give back,” she said.

Summary
Article Name
BobCAD-CAM Employees Lend Hand in Disaster Recovery
Description
With three hurricanes in a row leaving devastation in their wake, BobCAD-CAM employees made it a priority to help in many ways.
Author
Michael A. Downss
BobCAD-CAM Software