Tech Tuesday is a weekly blog that addresses some of the most common questions and concerns that I hear throughout the previous week from users of BobCAD’s CNC software. Both customers and future customers are more than welcome to leave a comment on what they would like to see covered for the following Tech Tuesday.

It’s that time again, we just released the first service pack for V32 and it’s ready for download. As a support or advantage plan member, you can download this update the current build of the software and take advantage of the updates & changes we’ve made.

Just log into your support portal at www.bobcadsupport.com to get started.

Q & A about BobCAD Updates and Service Packs

Q: What is a software build?

Each version of BobCAD has both a version and a build number. The version is the “series” of software you’re running, such as Version 23 or Version 30 etc. The build number represents the “iteration” of that version. As we update the software, we will release a new Build / Service Pack providing you the updates. The build number reflect the build of the version you are running. Make sense?

Q: How do I tell what build number for the version of BobCAD are I running?

In V32, go to File tab then the Help tab. On the top right of the screen, it will show both your version and build number.

If you are running an older version of BobCAD you’ll find the build number in a similar fashion. You’ll go to Help tab then the About tab: 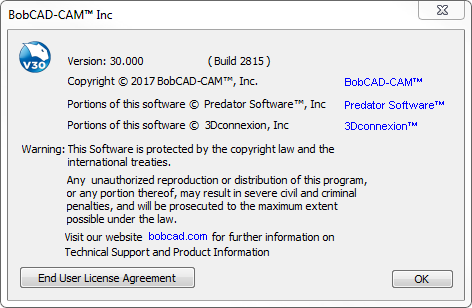 Q: How are users notified of new Builds / Service Packs?

There are a number of ways that you may be notified of a new Service Pack:

Q: How do I download the new Build / Service Pack?

The most common method for downloading a Service Pack is through your support portal. Just log into www.bobcadsupport.com

This section of the support portal will list all the software service packs and release notes.

Q: How often are Service Packs released and why is it important to stay on the current build number?

Typically we will release 4 Service Packs per version. Updating to the current version provides you with the most up-to-date version of your software. Bug fixes and software improvements are the main purposes of Service Packs. We recommend that you run the current build of the software across all your seats.

No. Files from the newer build will not open in an older one. This is one of the major reasons why we recommend to update to the current build for all your seats.

Q: How do you install a new Service Pack or build?

After you download the installation from the support portal, you run it. The software will install over what you currently have and updating your software to the current build.

Q: What kind of changes can I expect from the V32 SP1 (Service Pack 1)

As we release new Builds / Service Packs for the software, we update the help system for what’s new. Here is a list of some of the changes we made.

Join your fellow machinists. Get the latest Tech Tuesday CAD-CAM articles sent to your inbox. Enter your email below:
No thanks, I want to try BobCAD-CAM's CNC software first

Corrections made to V32 with SP1 –

Download a demo today and explore all of our surface modeling tools. Once you’ve downloaded a demo you we can setup a live one on one walk through, answering all your questions about the software and to demonstrate any features you’re interested in.

BobCAD-CAM has provided CAD-CAM CNC Software products to the global manufacturing industry for over 30 years. BobCAD-CAM software can be found to increase CNC productivity for many applications in aerospace, automotive, production manufacturing, mold making, general machining, woodworking as well as the medical manufacturing industry, consumer products, musical instruments, custom fabrication, defense industry and many others due to the products ability to automatically generate NC programming code for such a wide variety of CNC controllers. BobCAD-CAM software is also found in educational institutions throughout the world as well as independent hobby home use. Products include machining technology for 2, 3, 4 & 5 Axis CNC Milling, Routing, Waterjet, Plasma and Laser machines as well as 2 Axis CNC Lathe. BobCAD-CAM is modular allowing shops to start off at a reduced technology level and add technology as it is needed including an add-on, BobART, for artistic machining. Unique technology includes adaptive high-speed machining multiaxis milling and routing which is a first in the world of CAD-CAM software. BobCAD-CAM also provides a variety of quality training products that include regional and online training classes or private sessions tailored to specific applications. Professional certification and multi-tiered support solutions are available. Contact BobCAD-CAM directly for more information at 877-262-2231 or 727-442-3554.